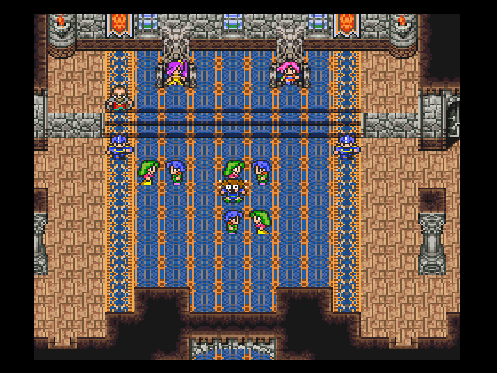 Reina and Faris Salsa are back on their thrones. Things seem peaceful... for now at least. Time to see what Boko's been up to lately. 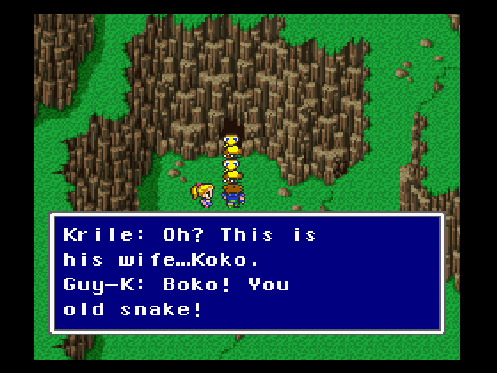 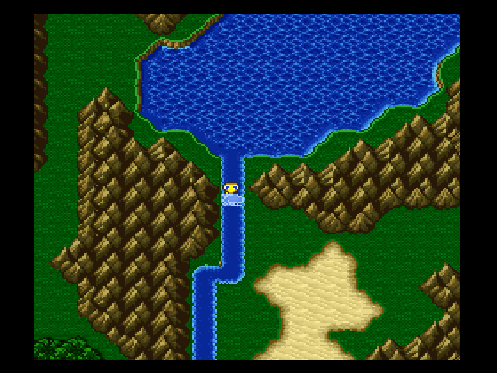 He started a family while I've been gone. Now I can finally cross rivers. 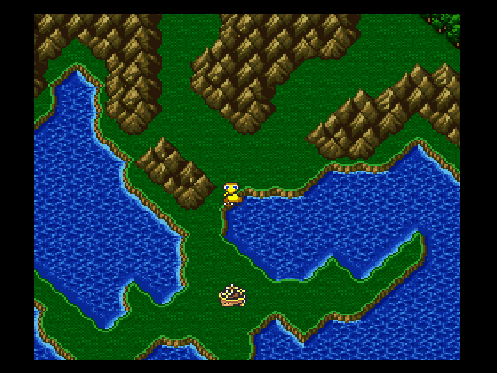 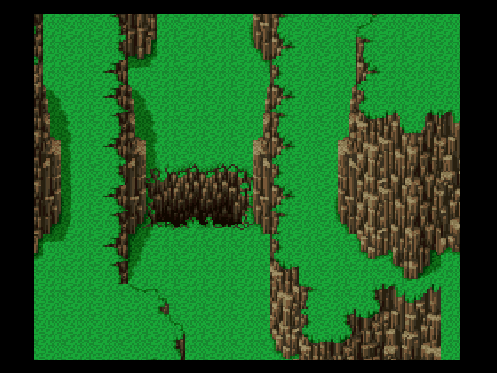 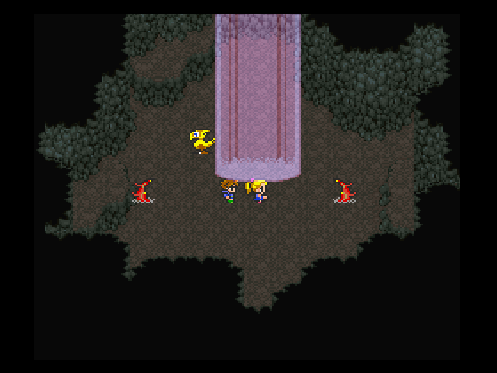 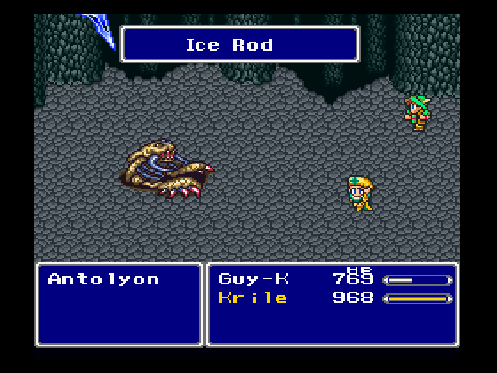 After making a pit stop in a familiar town (they talked about a cave with a turtle, sounds familiar...), I headed west, only to fall into a pit. It was the Antolyon's trap. It wasn't a hard boss at all, but was rather annoying, especially considering I'm only half the party I'm used to. It has the ability to cut levels in half, but I never gave it the opportunity. 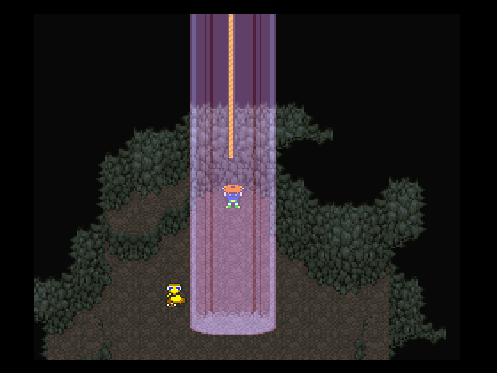 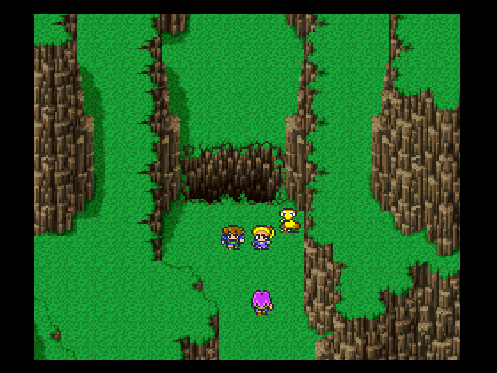 After the battle, someone set out to rescue me, teasing me with the rope for a while. After the stranger stopped playing around, I saw that it was Faris, who was getting dissatisfied with the throne. Krile said she got pricked by a thorn, which doesn't seem like a big deal. 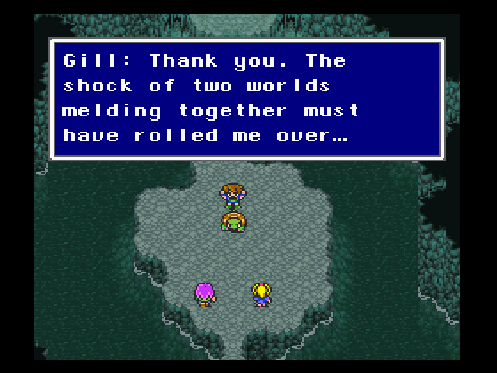 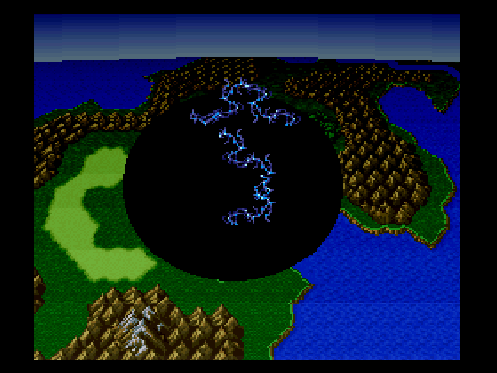 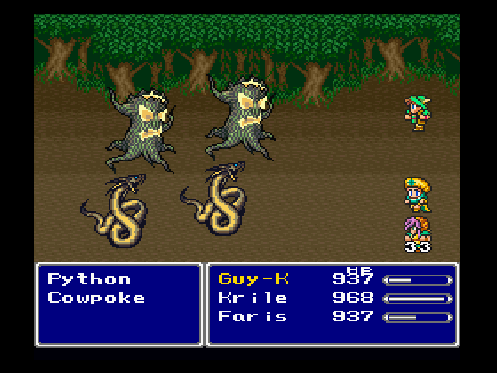 I wanted to see what this turtle cave was all about. It was Gill, but he was on his back. I rolled him over, and he told me the worlds merged. Turns out this was X-Death's plan all along, and turns out he was that thorn pricking Krile as well. He aimed to gain full control over the Void and demonstrated his powers by sucking up Tycoon Castle. Where Reina is, if she even survived, is currently a mystery. In the meantime, Gill leads me to the Library of the Ancients. There, he tells me about the 12 Sealed Weapons and the lithographs needed to break their seal (4 in all, each can only unseal three weapons). The first one is conveniently located in a pyramid to the west. Before I went to the Pyramid, I decided to head back to Karnak up north and stocked up on elemental rods. I'm going to be needing plenty of them. There were some new creatures, such as NeoGigas and Cowpoke (really?!). 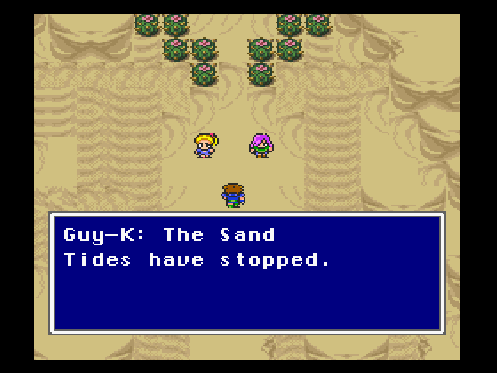 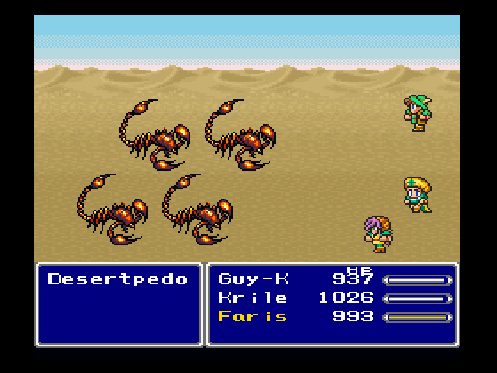 When I entered the desert, the sand tides have stopped, meaning I can enter the Pyramid without any issues. The desert also has new monsters such as the Desertpedo (REALLY?!?!), which sometimes drop the useful Dark Matter. 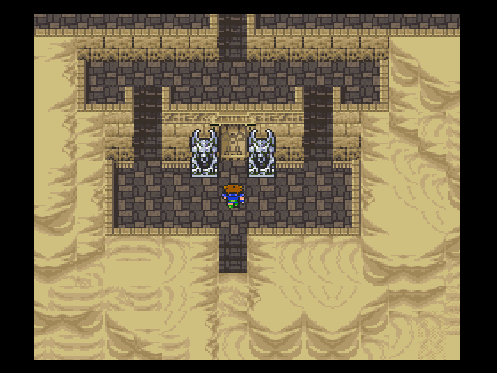 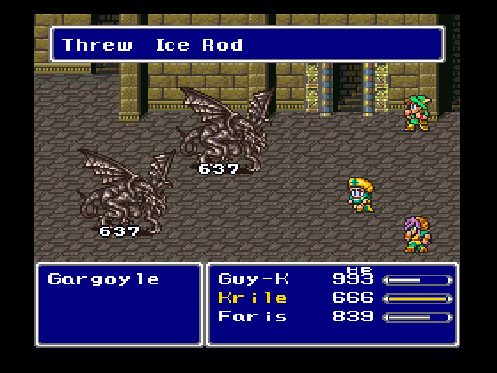 The Gargoyles are a tricky boss in that both have to be killed at once. Rod breaking is the only reliable way, but Krile is the only one capable of doing so thanks to the Equip Rod ability. It doesn't help that the Gargoyles have no elemental weaknesses. Thankfully, they don't really do much other than attack. 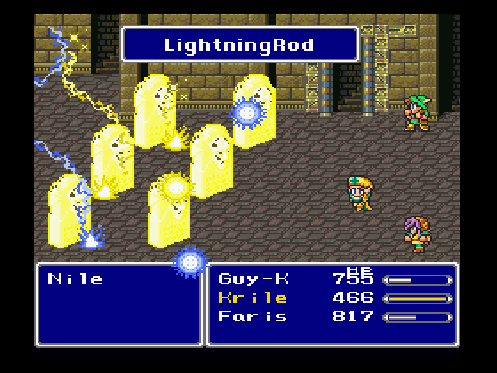 There's a good reason why I bought all those rods: the majority of the monsters inside have at least one elemental weakness (Nile weak to Thunder, the snake monsters weak to Ice, and the mummies weak to Fire). 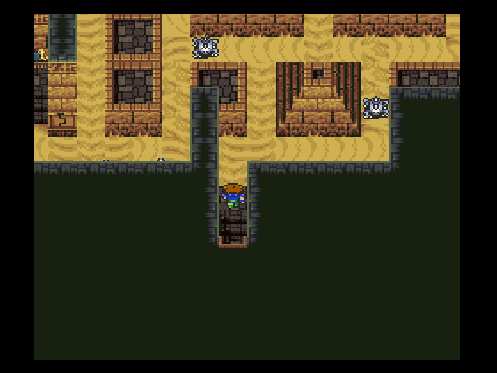 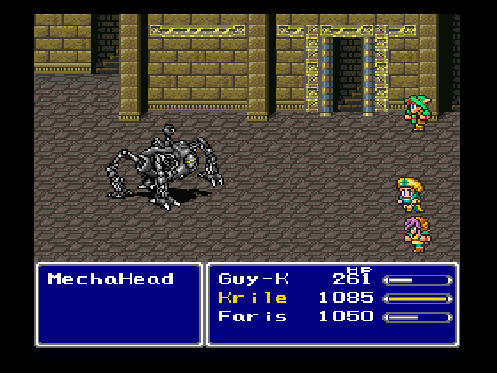 The most horrifying room is a maze swarming with MechaHeads. They home in on you slowly and have fierce attacks such as a beam that targets the whole party. Luckily they're weak to Thunder Rods. Other troublesome monsters include the Zeta Zone (nigh impossible to run from and summons strong monsters) and Fall Guard (counter-attacks and can hit members with the Old status). 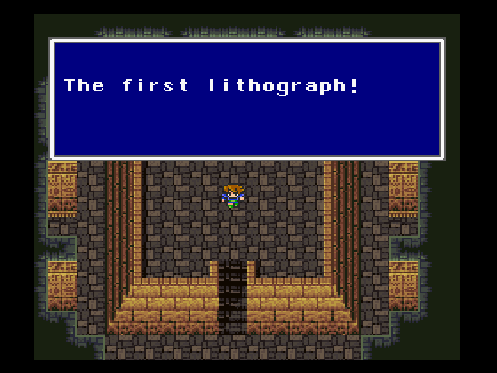 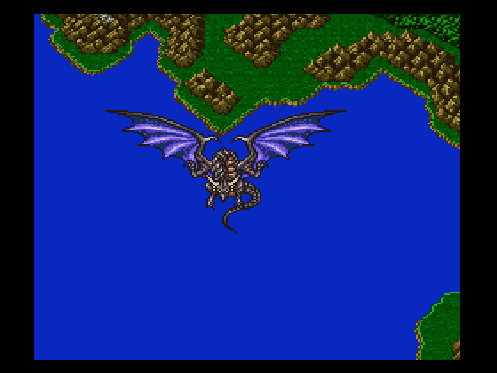 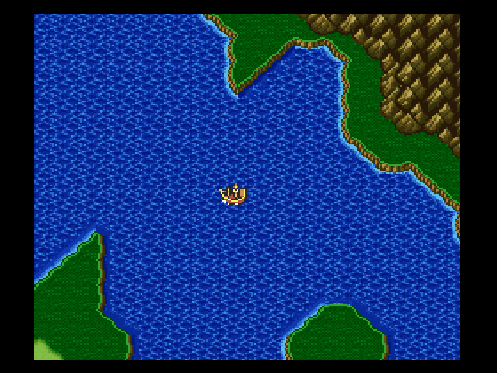 I finally got the first Lithograph. When I read it, Bahamut rose from the peninsula, and my ship started drifting toward the west. 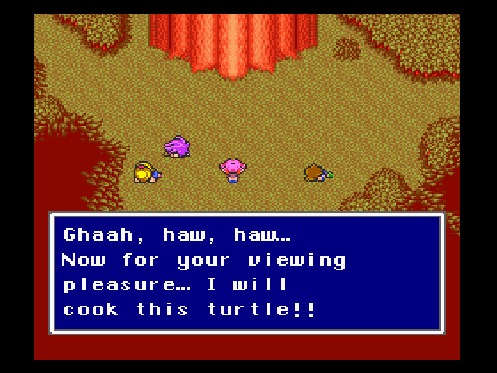 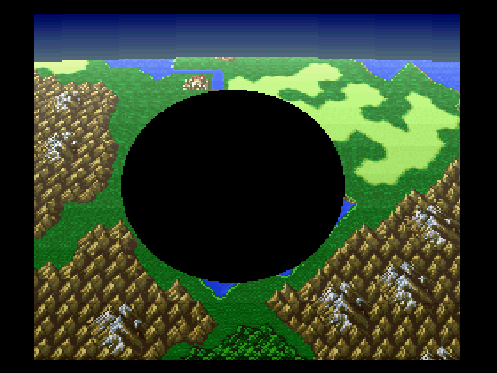 When I came back through the Elder Tree, a Wind Drake flew by with Reina. She was unconscious, only to reveal that she was being possessed by one of X-Death's minions. X-Death went on to suck up the Library of the Ancients and all of its inhabitants. The Wind Drake sacrificed itself to draw out the monster so I can kill her. 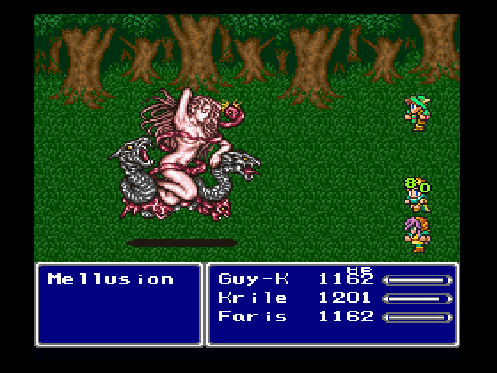 Mellusion wasn't really a hard battle, especially with Haste and a successful Slow in place. She was a barrier change boss, but I didn't bother with weaknesses. I relied on SShot, critical hits from Elven Bow, and Comet. 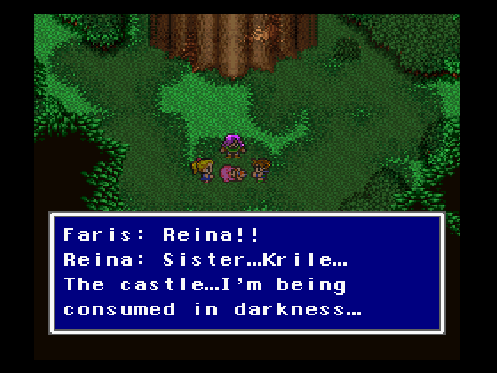 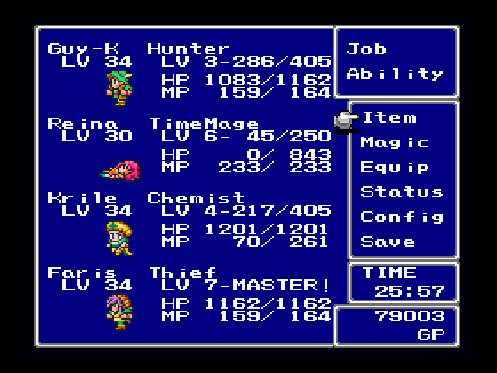 She finally returns to my party, but unconscious. Gee, I wonder how I'm supposed to bring her back to life... 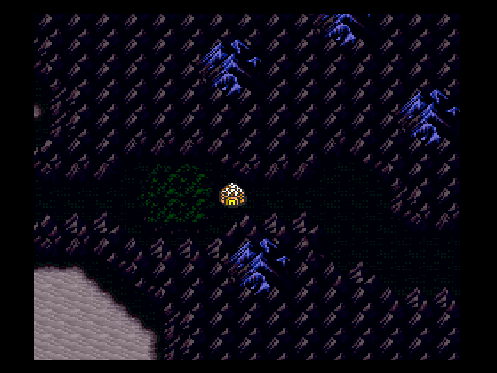 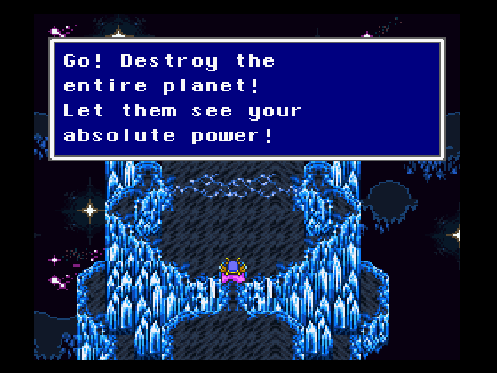 I boarded the ship, only for X-Death to destroy even more towns. Good thing Karnak wasn't on his list, because it's the best place I can stock up on elemental rods. I made my way to Kuza, the Sealed Castle to get some sealed weapons. 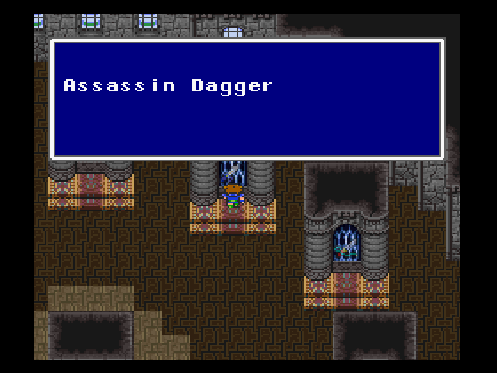 I chose Yoichi's Bow (30% chance for a critical), Assassin Dagger (25% chance of instant death), and Sage Staff (strong against the undead + damage based on magic stats). Time to seek out the others, even if I can't use most of them at all.