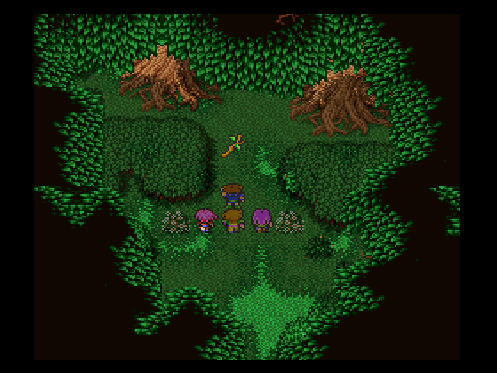 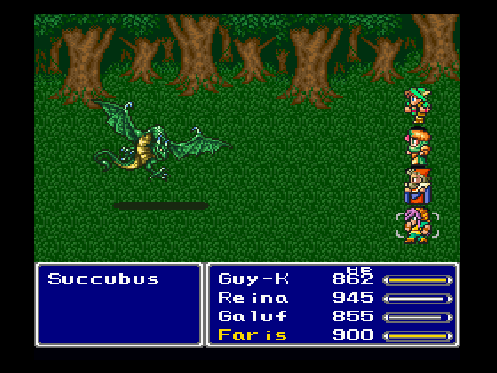 Moore Forest is home to a variety of annoying creatures, such as the Galacjelly (another low HP/high evasion monster), Imps (can confuse and also have annoying evasion), Mamon (can Berserk its allies), Mini Mage (can drain MP and shrink people), and Succubus (REALLY?! THAT'S A SUCCUBUS? REALLY?!?!?!?!?! HAVE THEY NOT SEEN A SUCCUBUS BEFORE?

) (wind elemental attacks on the party). One of my characters finally mastered the Thief class and gained Footwork, a passive ability which boosts agility. 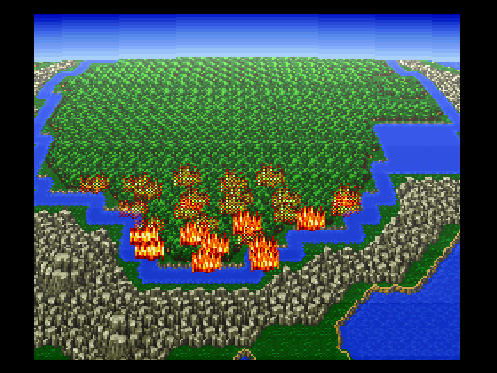 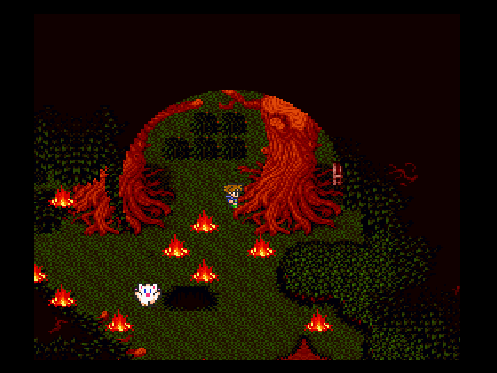 As I wandered deep into the forest, X-Death lit it on fire. Luckily, a Moogle saves my life and guides me to an underground cave to wait until the flames die down. There's a recovery spring inside as well. 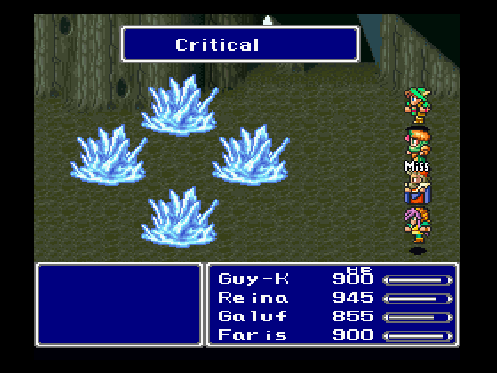 These crystals weren't too bad, although I was worried when one of them cast Fire 3 on the party, leaving them mostly dead. None of the other three even did any major damage, and I even killed two of them with critical Crossbow shots. I had float in place just in case one of them used earthquake, but it didn't happen. 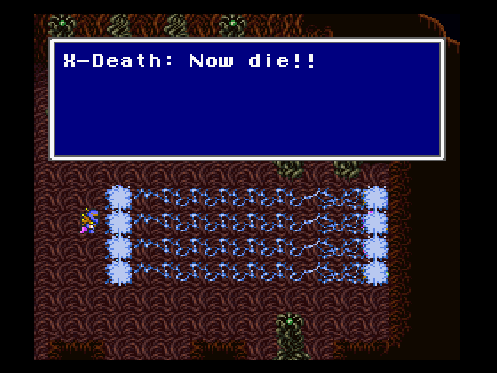 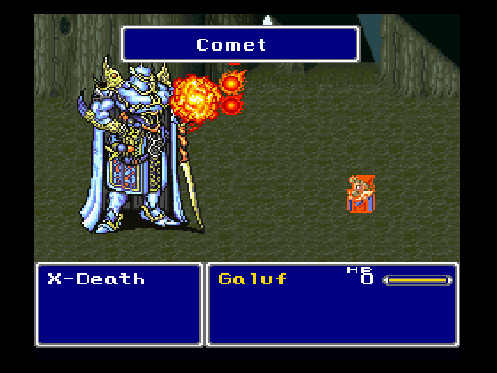 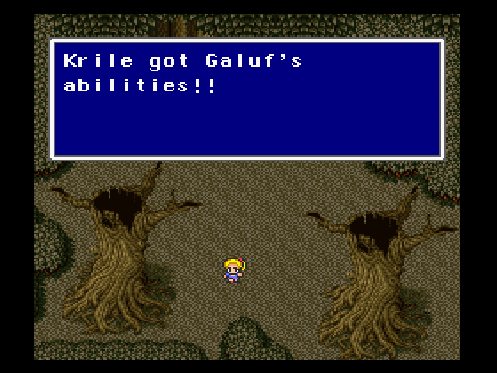 Unfortunately, I did exactly what X-Death wanted: to break the seal. Krile comes to the rescue, but X-Death is also too much for her. This enrages Galuf to the point of using what's left of his strength to ward off X-Death and save everyone else. Krile gains Galuf's abilities and joins my party. 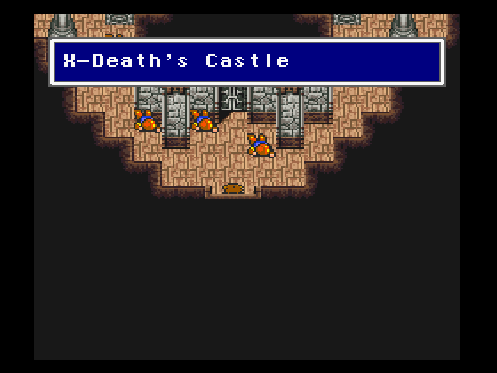 It was time for revenge. I made my way to X-Death's Castle to settle the score once and for all. 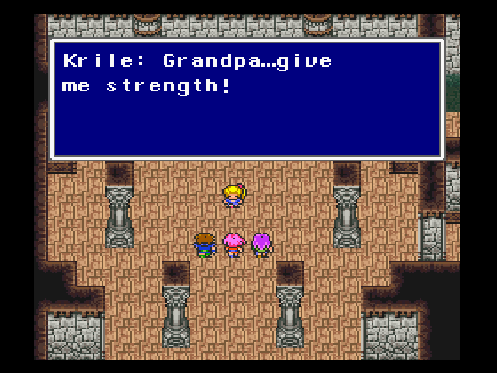 Unfortunately, I reach a dead end. Krile calls for help in breaking the illusion, and Galuf and Kelga deliver their strength. 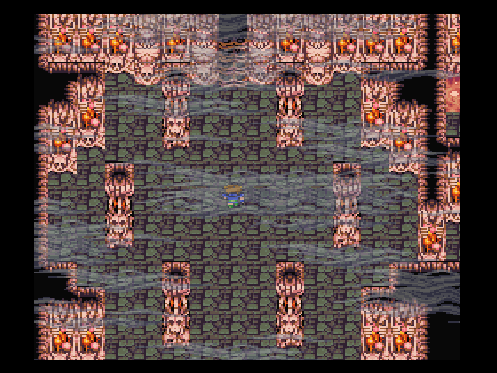 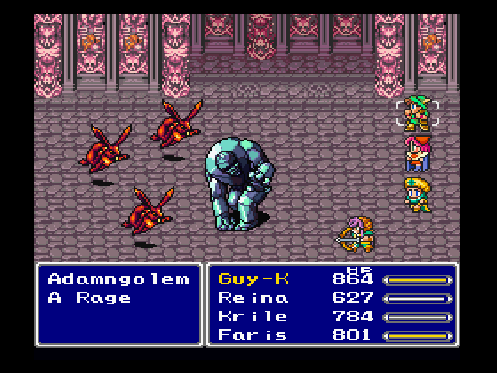 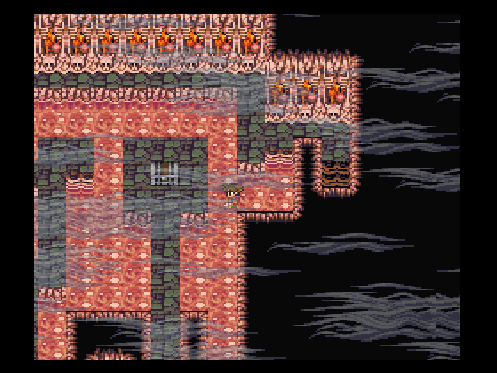 Ew. At least I can progress now. Monsters include the hard-hitting Adamngolem (REALLY?), the annoying A Rage (revives its cohorts upon death), Reflect Mages (perma-reflect and loves to cast spells on theirselves), and Black Warlocks (loves to use status ailments such as Confuse and Stop). The worst of these are the Hypnots (kills with its Blaster) and the elemental dragons (not that bad on their own, but lethal in packs). There's lava, but thankfully I can float over it. Among the treasures, I find the Gale Bow (chance to attack four times per turn at half damage, effectively doubling damage output) and Twin Lance (attack twice per turn). 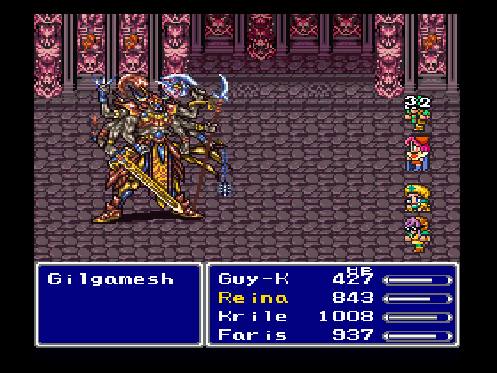 I found a room with an empty chest. Turns out a familiar face already took the treasure: Gilgamesh. The battle was pretty straightforward but long. When he transformed, he ended up doing pathetic damage to me. He didn't have the legendary Excalibur, but the "legendary" Excalipur. X-Death had enough of his buffoonery and cast X-Zone on him. 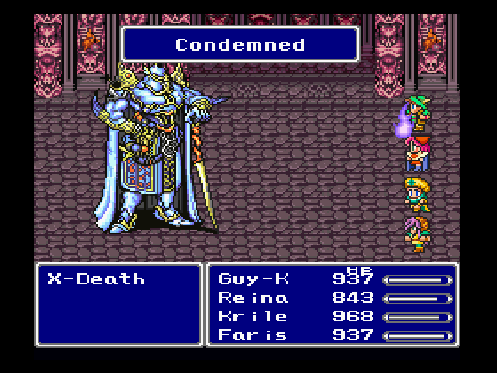 The climactic battle at last. X-Death is a formitable opponent with many strong attacks and deadly spells. He's done enough damage to force me to use Resurrection (Phoenix Down + either a Tonic or a Potion) and re-Haste units who were either killed or Dispelled. At the halfway point, he started attacking twice per turn. Despite the circumstances, I still managed to defeat him in one try. 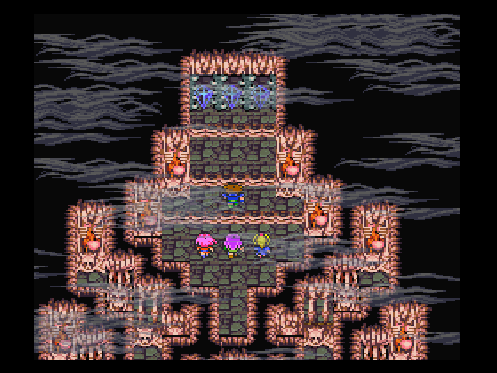 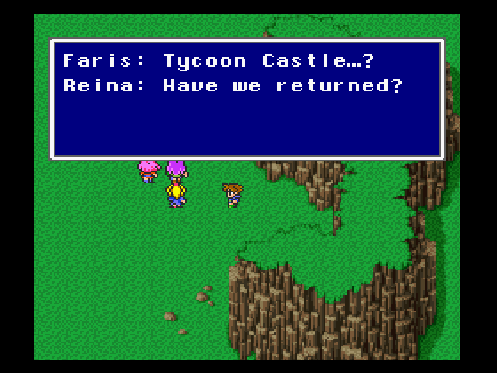 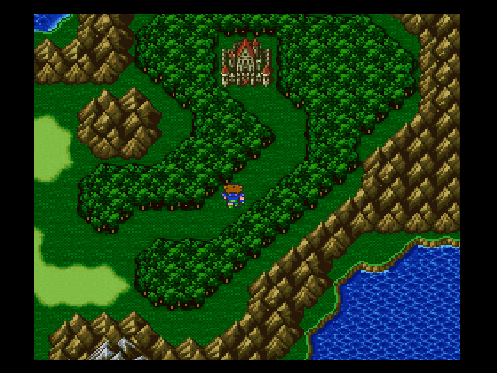