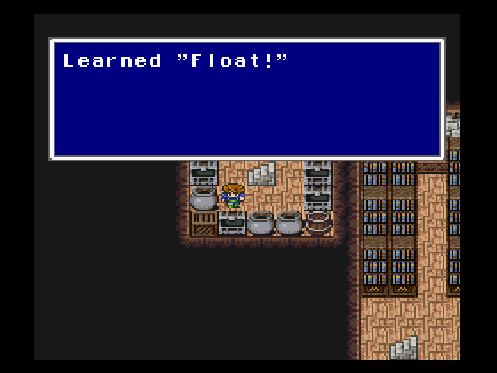 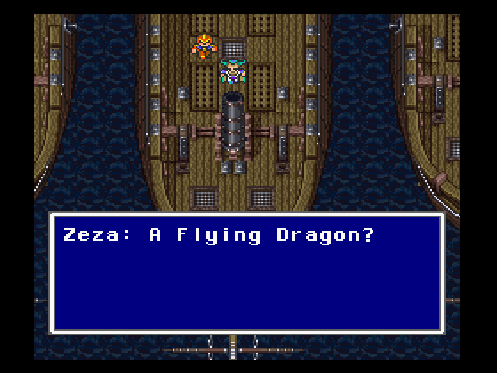 I made my way to Surgate Castle, and the guards offered me to take anything. The most important thing here is the Float spell, which lets me hover over trap floors and earth elemental attacks. There wasn't much else in the castle; I couldn't even use any of the weapons they're selling, and I had everything I could use. It was time to head to Zeza's fleet. I was told about a plan to destroy the barrier blocking X-Death's castle, which means destroying a barrier tower. I rested in the ship cabin until... 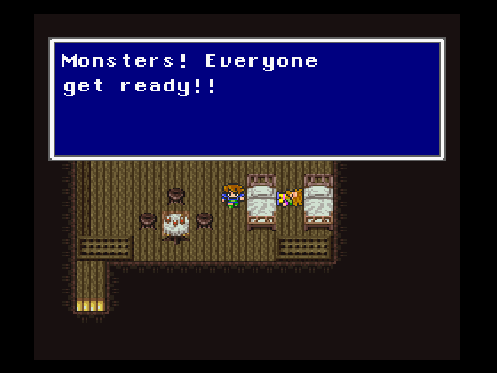 I was woken up by a monster attack. 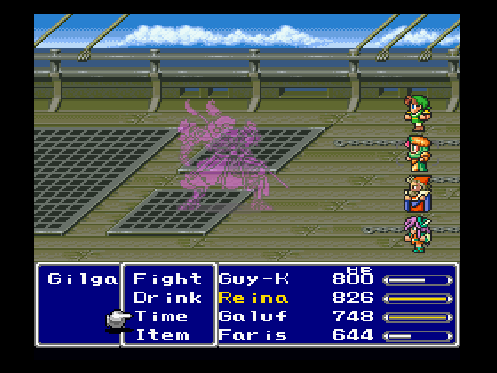 After killing a few weak goblins, I was face-to-face with Gilgamesh yet again. Amusingly enough, he is not immune to insta-death, and all it took was one Crossbow round to kill him. He didn't get a chance to do any damage or summon his buddy. 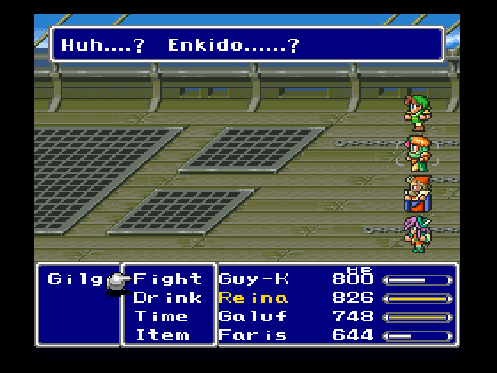 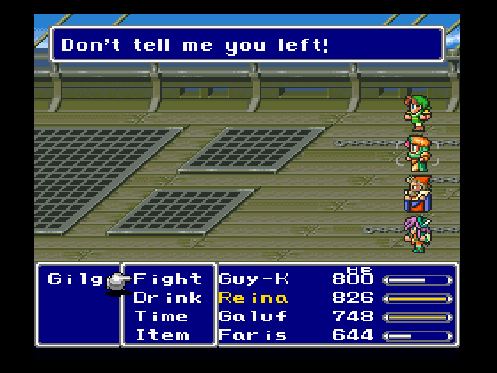 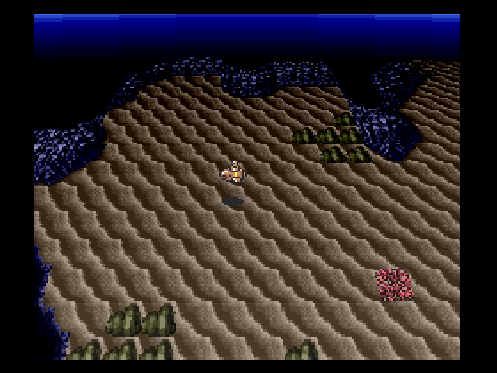 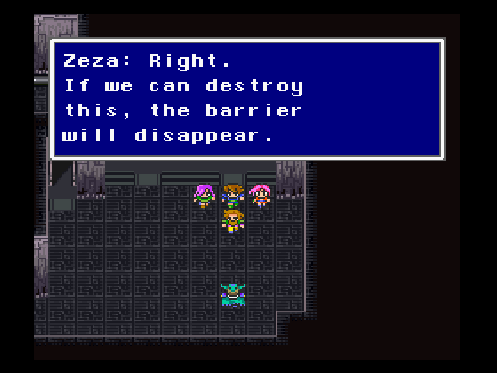 As it turned out, the fleet was a decoy, and one of the ships contained a secret passage to a submarine. Zeza piloted the sub to an underwater cave leading into the Barrier Tower. I was tasked with destroying the antenna while Zeza goes to the power room. 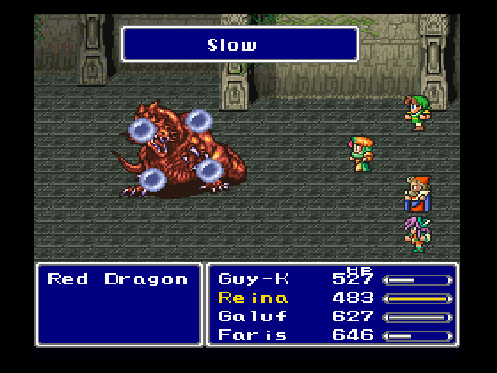 There were some monsters that ranged from annoying to lethal, with the chest dragons verging on lethal. If it weren't for Slow spells, I would've been annihilated. The Red Dragon's chest provided me with a Hair Ornament, which halves MP cost. 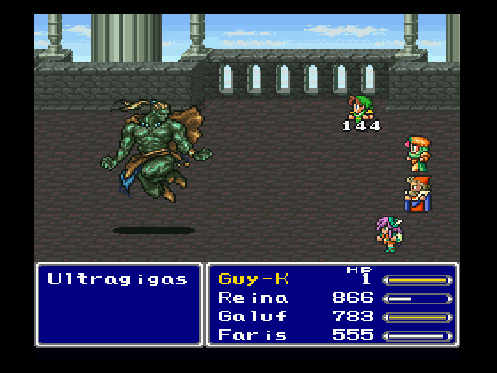 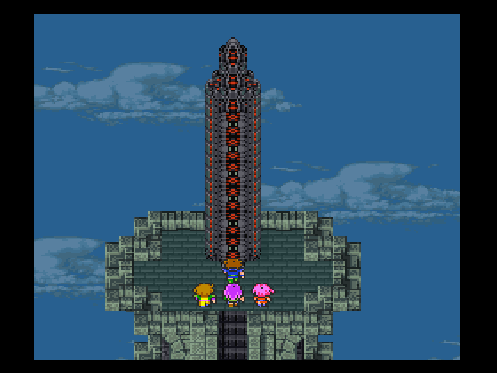 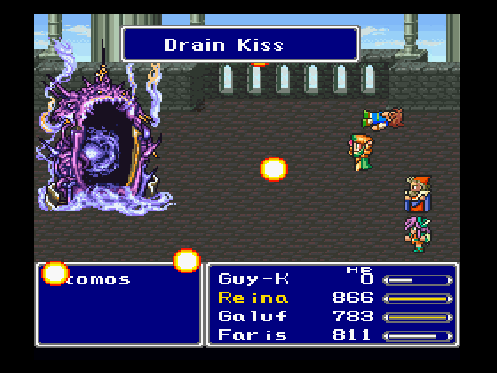 The trick in dealing with Atomos is to have one of your members dead upon entering the boss fight. Otherwise, he'll spam Comet until one of you is dead. I let my thief die because he had the lowest damage output of the four. My chemist had the useful Drain Kiss (mix Maiden's Kiss with Turtle Shell), which sucks roughly 1500 HP from an enemy. The Time Mage was no slouch either; he switched between breaking rods and Comet. I accidentally wasted a Drain Kiss on the Hunter, which was no big deal, considering that she had the second lowest damage output anyway. Atomos tried to cancel out my Haste with Slow 2, but he was mostly too busy sucking in my dead party members. Atomos was finally killed, but sadly so was Zeza, who was caught in the explosion. 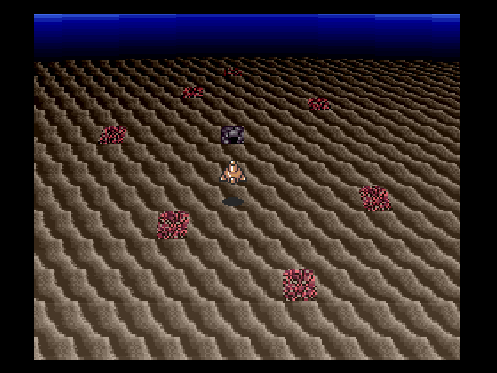 I finally have control over the submarine, and my first stop was Gill's Cave, this time for real, except underwater. The only monsters within are Radiators (blood-sucking slimes with high physical defense) and Metamorpha (an old man who randomly transforms into other monsters, ranging from monsters I fought ages ago to Summons). 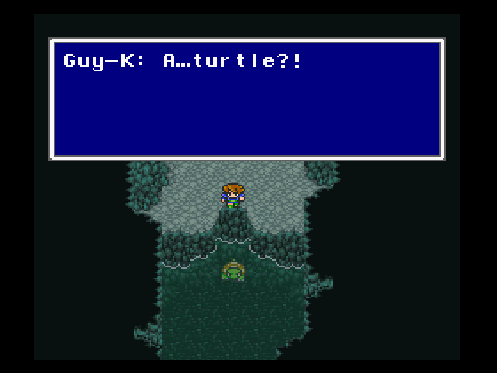 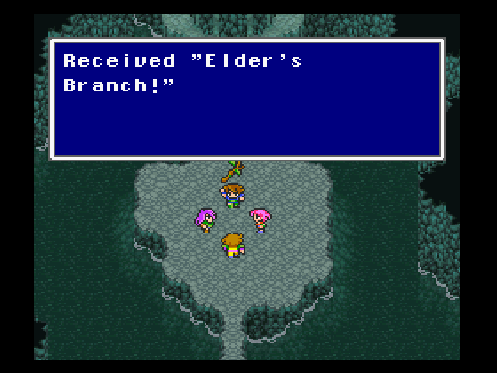 I ventured my way to the end of the cave and found a turtle. Turns out that he was Sage Gill all along. He told me to go to Moore Forest before X-Death gets what he wants. The shelled sage handed me the Elder's Branch, which allows me to enter the forest. 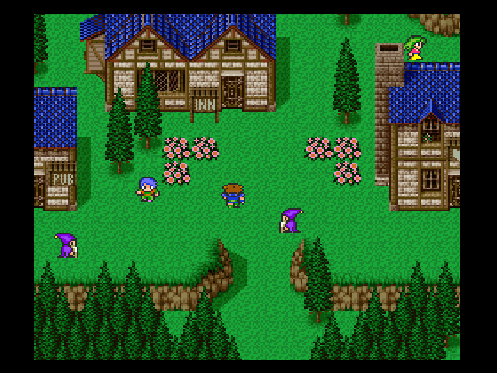 After navigating my way through the sea and emerged in a lake near a village. I entered the village and stocked up on supplies, equipment, and Level 5 Time Magic (the most useful being Haste2, which boosts the speed of my entire party).