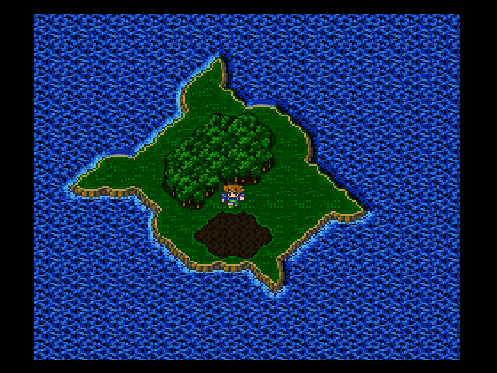 We begin on a solitary island, commonly known as Tent Island for the items the only type of monster on the island drops. Reina and Faris got abducted by monsters. It was up to Barts/Butz/Butts/Guy-K... 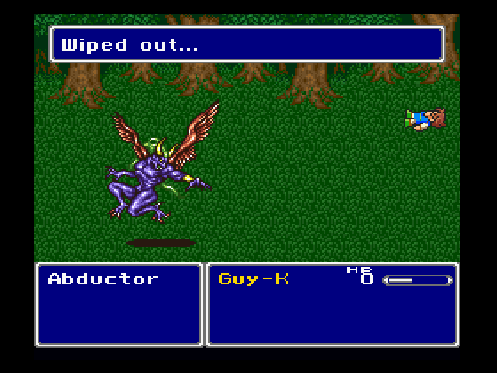 Needless to say, he didn't fare much better. Thankfully, victory was optional this time. 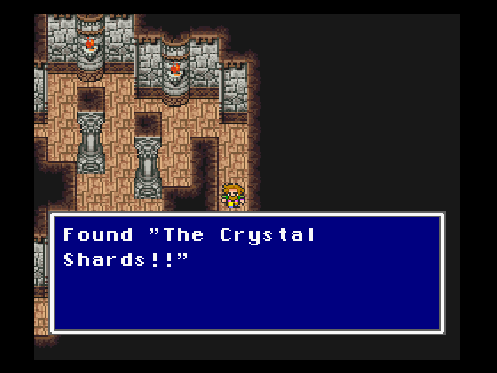 It was up to Galuf to save them all. 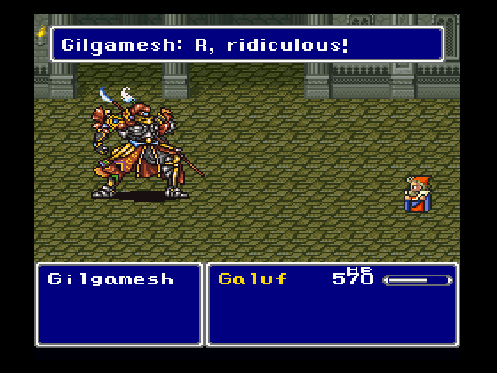 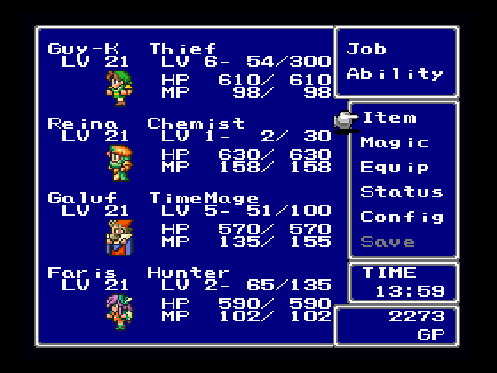 All it took was one Demi to win the "fight." I didn't even plan on having Galuf be a Time Mage; he just happened to be one when he left my party. They finally became a party of four again. The monsters in the castle were pretty weak and easily dispatched. 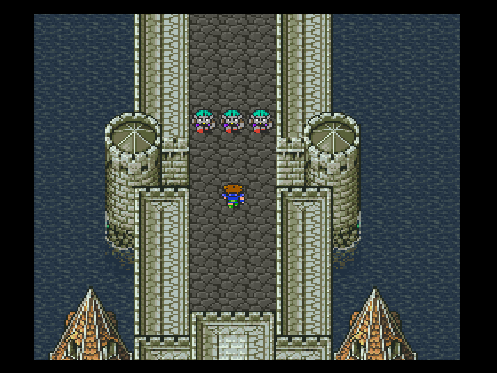 The Big Bridge was full of monsters. The LilChariots threw Mustard Bombs, which hit hard enough for two to kill a member. The rest of the monsters were nothing special, including the anticlimactic Neo Garula, whose only trait is taking twice as long to kill. 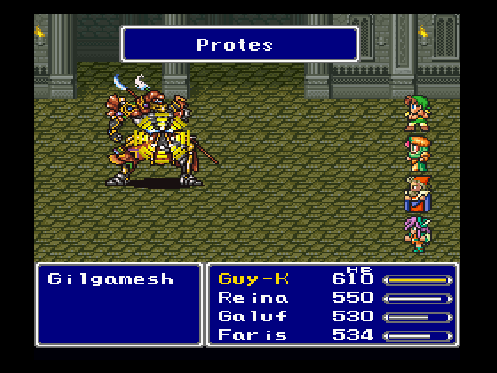 Gilgamesh was tougher this time around. The first half of the battle was nothing special, but the battle became drawn out and much more difficult after he buffed himself with Haste, Protect, and Shell. Rod breaking was my only means of doing big damage. After fighting more unremarkable enemies, a barrier formed around X-Death's castle and blew my party away. 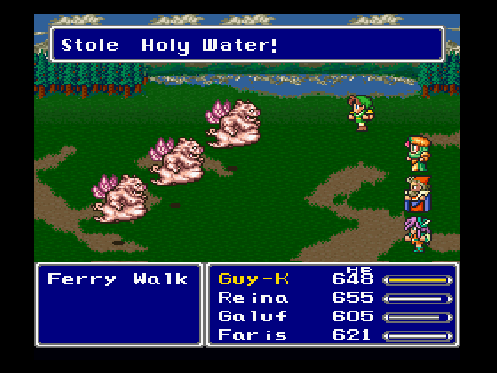 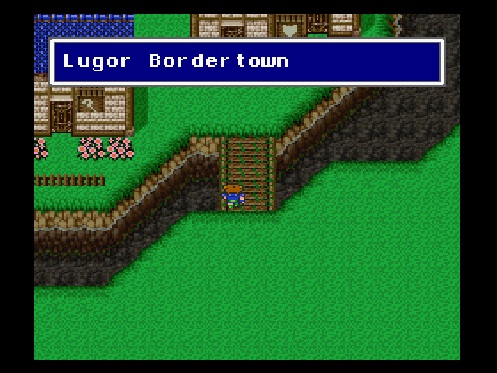 I found myself in wilderness, with monsters such as Ferry Walk (what), a good source of Holy Water (combine with Antidote for Samson Power, which will come in handy later when I can actually Mix). The town of Lugor has some new Time Magic and upgraded equipment. One spell of note is Comet, which does decent non-elemental damage to a single target. I went south to investigate the castle, but all I found were powerful dragons that kill me and petrified weapons. 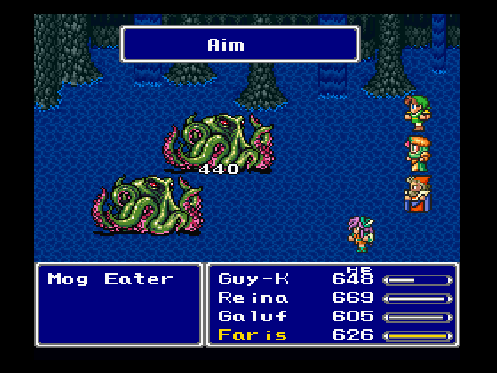 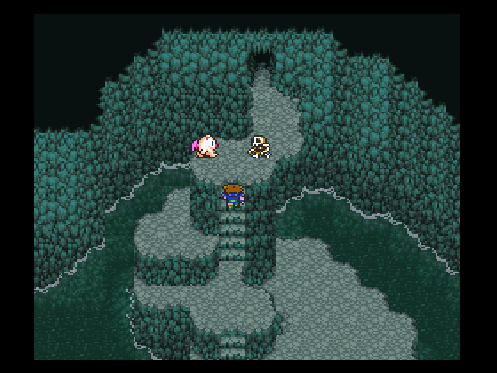 I moved on to a forest and found a Moogle. He fell down a hole, so I followed him. I rode the currents, fighting Moogle-eating octopi, tough crabs, slimes that shrug off physical attacks, and Frieza... I mean Freeziabats. When I made my way to the Moogle, it was assaulted by a humanoid skeleton. 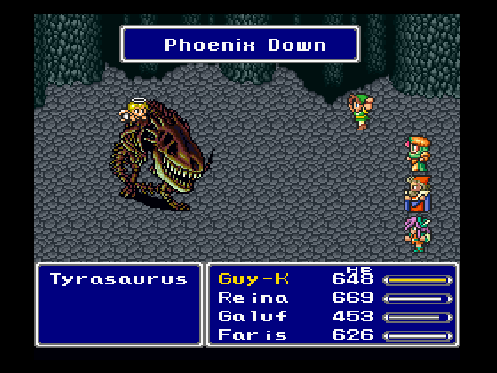 ...or a dinosaur skeleton. Make up your mind, Squaresoft! This picture sums up the whole fight. Most pathetic boss in the game. The game even handed me a Phoenix Down before the fight. It's like they want me to win. I even learned the fabled Mix command. After the battle, the Moogle gives me a hint on how to navigate to the Moogle Village without getting eaten by sandworms. The village had plenty of treasures (such as the Dancing Dagger, which lets me use random dance commands; combine with Lamia's Tiara to increase odds of Swords Dance), but was otherwise nothing of note, so I talked to the rescued Moogle to progress the plot. 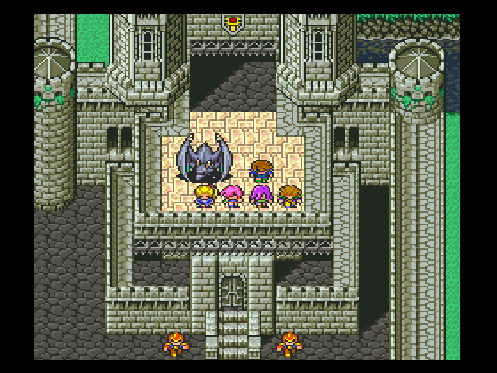 The Wind Dragon flew its way back to Val Castle. I found a Teleport spell and a few other random items. I checked on the dragon and saw that it wasn't looking so well. Its cure grows in the Valley of the Dragons. 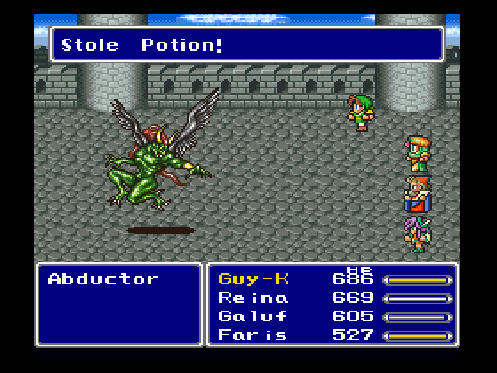 I was attacked upon leaving. This time he was green, but this time I was not only stronger, but outnumbering him. At least Tyrasaurus had a crippling weakness. This guy's just pathetic. 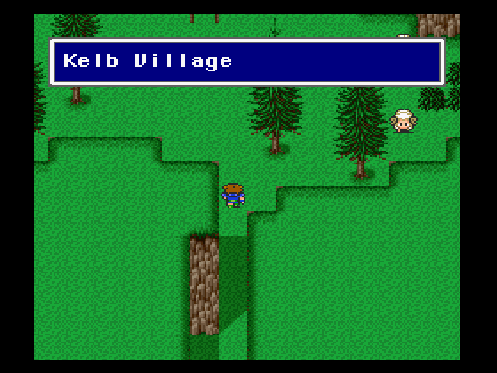 Just more plot advancement, more generic enemies, and some money grinding until I fully upgrade everyone. The Valley of the Dragons lives up to its name. It's got dragons, but none of them are of the living. These undead zombies have a nasty Poison Breath but always drop valuable Dragon Fangs, which when mixed with healing potions, temporarily increases unit level by 20 (twice as strong as Samson Power); you can also steal Dark Matter (another valuable ingredient), but they're very rare. The Poison Eagles have low health but annoyingly high evasion; I needed to use Aim to kill them easily. Golem also pops up, but he's useless to me and as far as this run goes, he's a jerk who hits you and runs away. 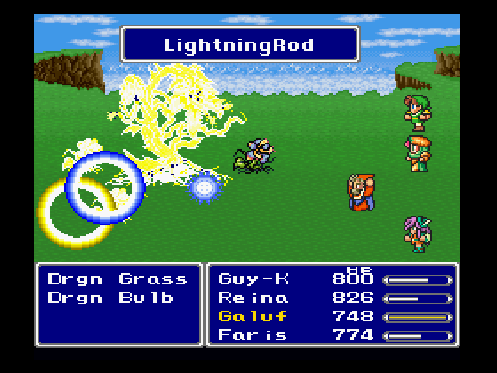 This boss fight wasn't too hard. I just broke rods when it summoned its pods and focused most of my attacks on the main body. I'm not sure if that critical hit with Faris and the Crossbow did enough damage to finish it off, or that it turned out to be an insta-kill. It's not immune to instant death, so it might've been the latter. 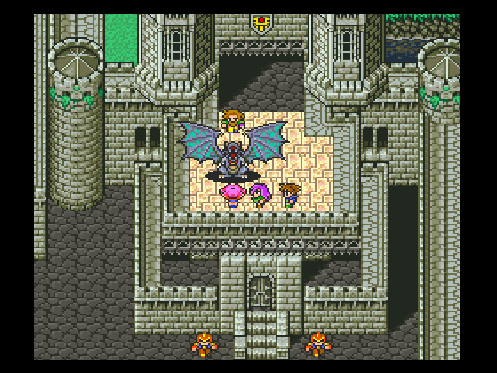 I gave the dragon the grass, and it got much better. Now I can fly over anything that isn't a mountain again. I was told to see a sage known as Gill, but when I tried to enter his cave... 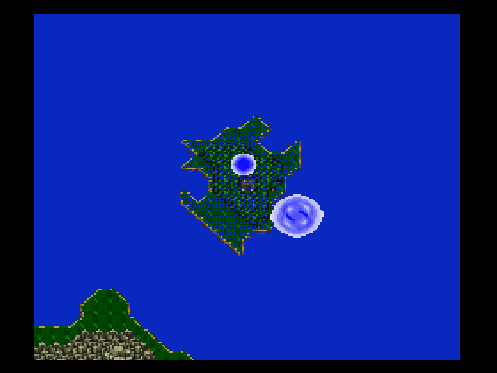 ...the island sunk. Looks like I'm going to have to find another way in...