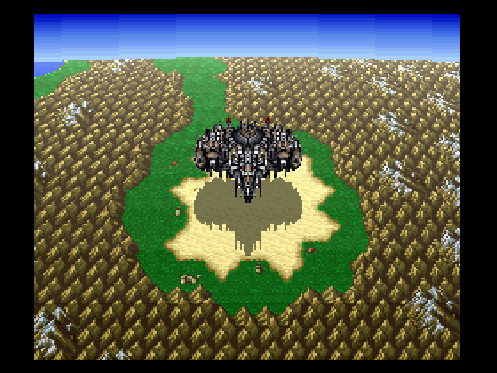 When I flew over to the proximity of Gorn, the ruins, which look more like a spaceship, rose from the desert. I reported the news to Cid and Mid, and the two geniuses told me to get some Adamantite. I went back to the Tycoon area meteorite to obtain some, only to be attacked by a giant turtle on the way out. 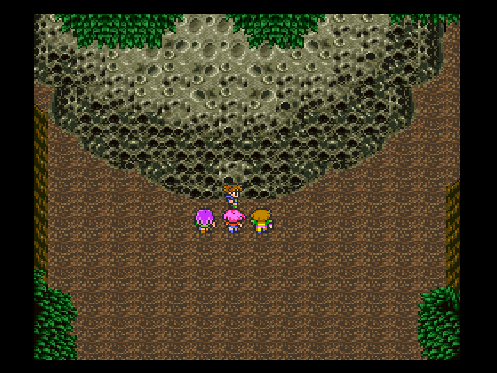 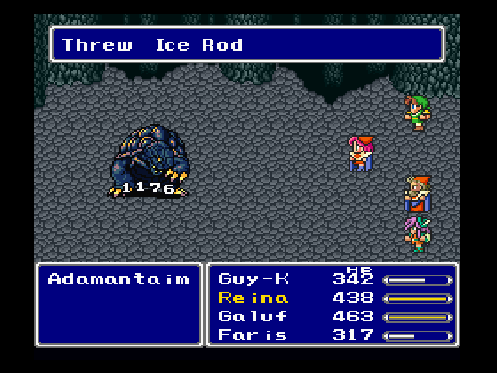 He hit for decent damage and had a hard body, but two broken Ice Rods were all it took to ward it off. 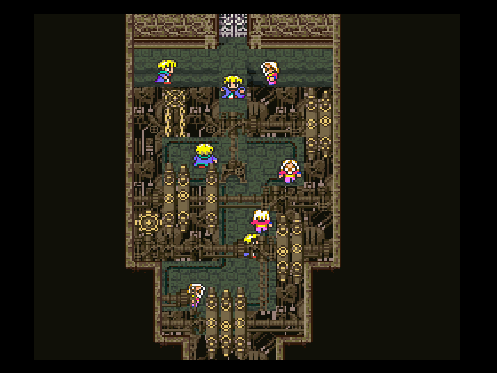 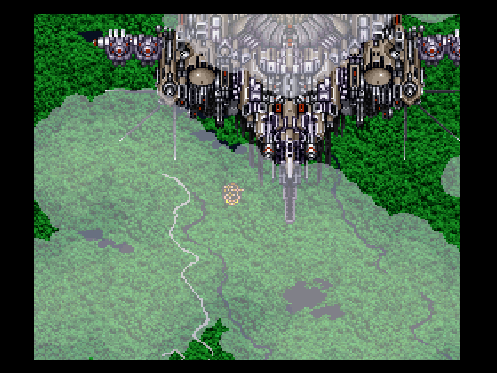 I give the duo the Adamantite, and they were up all night fixing the airship to fly high enough to reach the flying ruins. I was warned beforehand about the cannons. 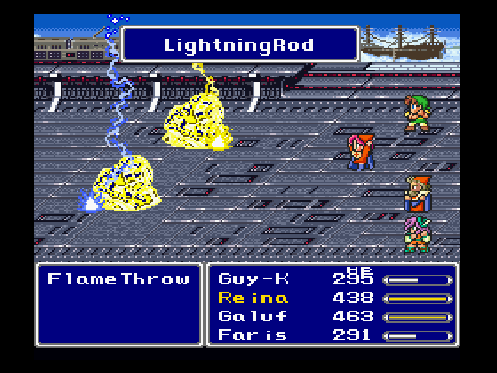 I couldn't do this sequence in one go. I was forced to go back to grind some money to buy more Lightning Rods. 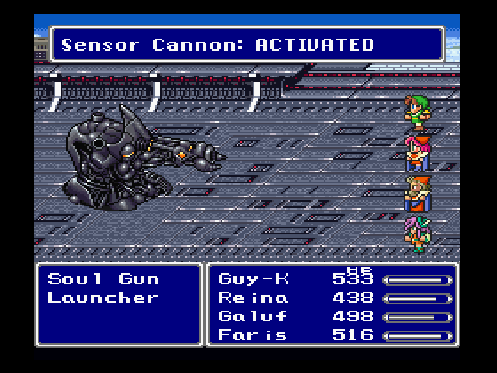 I begun the battle by breaking two Lightning Rods to get rid of the Launchers. I broke several more trying to finish off the main body. I almost ran out by the time the fight was over. I farmed money on the Crescent Island to buy some more Lightning Rods before I entered the ruins. 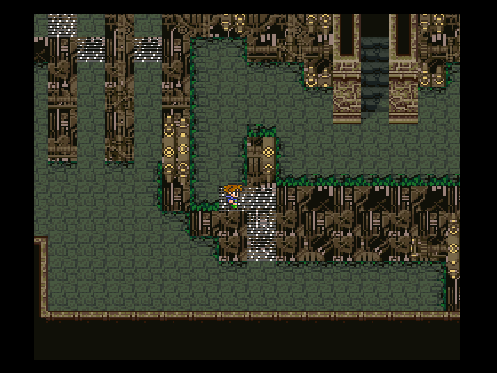 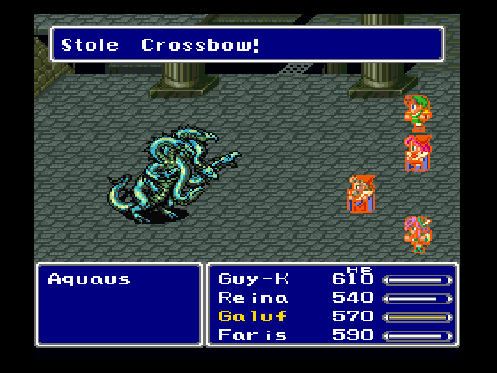 The Ruins of Ronka have invisible floors which aren't so invisible thanks to my thief. The durable Ronka Knights have Potions I can steal (or Power Drink, which is useless even if I get a Chemist). Elixirs can either be stolen from Fan Wizards (they usually give up Tonics instead) or dropped by Ra Mages. The Archeotoads have them as well but also have Toad Song. The good news: I can steal Maidens Kisses from Lamias, the bad news: said Lamias can confuse or paralyze units. The StonedMask (really?!) can blind the party, which is nothing Nightingale can't fix. There's also Gidhra (given the less impressive and trademark infringing "Aquaus," not to mention misleading because he has no water attacks), who is brutal and has gotten me aa one Game Over once (his PoisonBreath hits hard, but it's easy to paralyze (if I'm lucky to get the Flying Squirrel out) and undead, so Phoenix Downs can kill it) and has a powerful Killer Bow to steal (given the rather generic "Crossbow"); the Killer Bow/Crossbow has a small chance of instantly killing even undead minor enemies. Speaking of stealing, I learned Mug, which lets me attack and steal at the same time. Sadly, it doesn't replace the standard Steal. 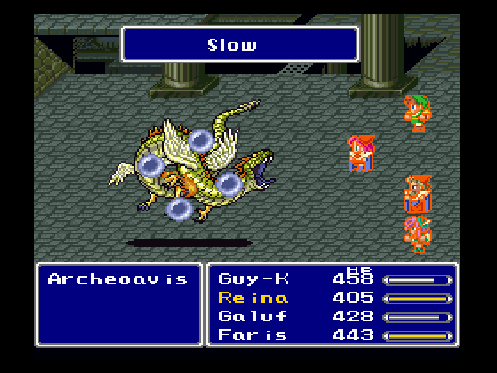 Archeoavis was a lengthy but otherwise easy boss fight, especially with Haste, Regen, Slow, and Crossbow rounds. His Maelstrom was easily countered by the Potions I stole from monsters. It turned out way better than I expected. The final crystal shattered, and my next job is...

Chemist is one of the more broken classes. It has a variety of useful abilities ranging from temporarily leveling up characters in battle to cutting enemy defenses in half. It also has the ability to double potency of items; recovering 1000HP instead of 500HP goes a long way. In order to reunite with Galuf, I had to power the meteorites with Adamantite. The Tycoon meteorite went without a hitch, but the Walz meteorite... 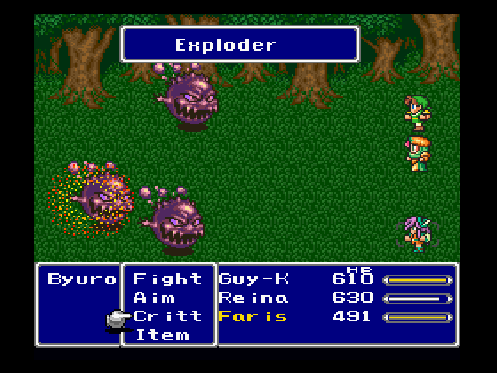 Byurobolos was a pain without the ability to break rods (since Galuf was a Time Mage when he left, I was obligated to change Reina to a Chemist who happens to know Time Magic). I was hoping that they didn't all mass-destruct me into a Game Over. Thanks to the occasional attacks and Demi, Exploder wasn't as much of a threat. In fact, I was hoping for them to use Exploder at low health so they could bypass their revival. After that problem's been eradicated, it's time to check out the Karnak meteorite and found another monster. 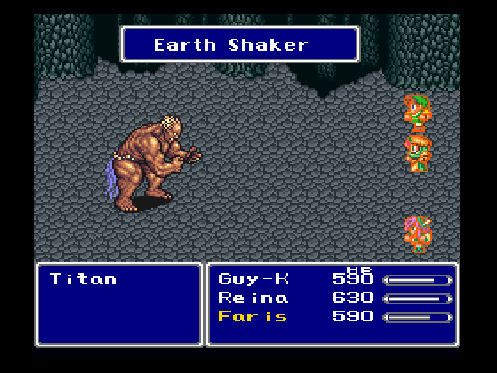 Titan was a borderline nightmare. His Earth Shaker hit my party for massive damage. The usual Haste buffs, physical attacks, the occasional healing, and a couple of attempts at Slow were good enough. He let out one last Earth Shaker, but it wasn't enough to end me. I also got the Titan summon, but who cares? I'm not allowed to use Summon magic. Off to the Gorn meteorite, and (sarcasm) what a surprise, another monster. KimaBrain was just as bad as the Titan. Its Aqua Rake hit my party hard and even killed one of them. Thankfully, I managed to get a Slow on the enemy and Haste on my allies. At least it didn't let out an Aqua Rake in its dying breath. 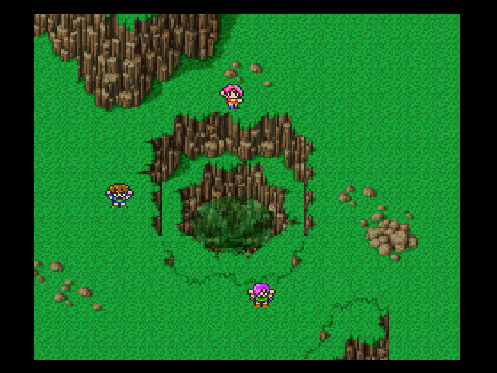 Time to go to the next world. No looking back.