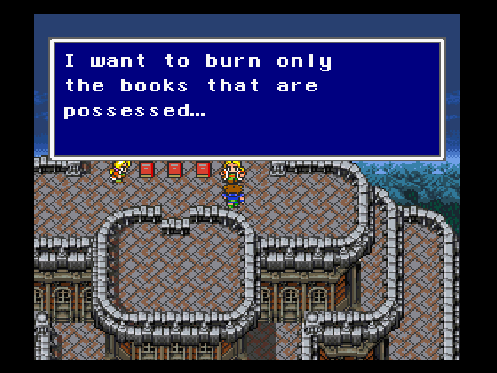 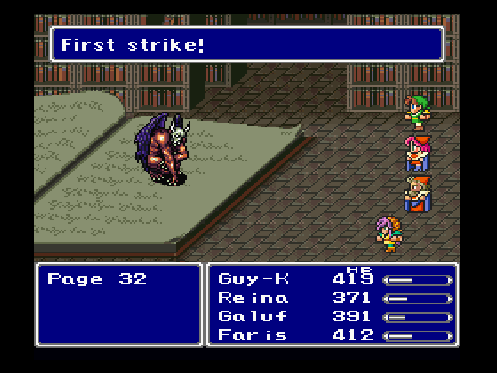 I'm at the Library of Ancients at last. There's plenty of cursed books. I first decided to explore the roof and greeted by scholars who are trying to burn cursed books. The first two looked innocent, but the third one attacked me. Since the enemies are all book-based, Fire Rod is the logical weapon for the Time Mage. Page 64 is notorious for his Lv 5 Doom, but since my characters are at 16 and the monsters give meager experience, I have little to worry about. Page 32 has Green Berets, Page 128 has Ethers, and Page 256 has Potions and Ninja Suits. 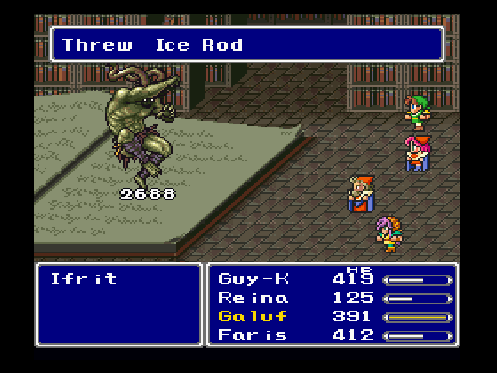 After exploring the library and solving a few simple puzzles, I found a book that contained Ifrit. He was a joke thanks to Ice Rod breaking but got a good Fire 2 in. He says he shall give me his power, but all it's good for in this run is plot.

Thanks to two Fire Rods, Byblos was a total joke. 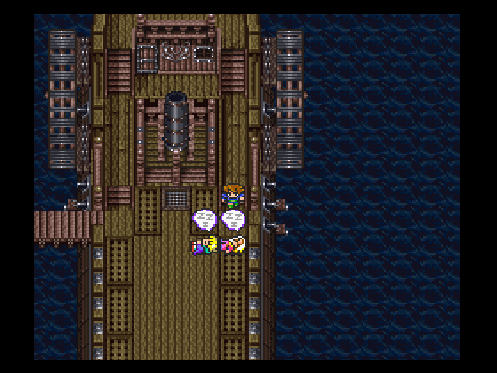 After reuniting Cid with his grandson Mid, the duo repaired the Fire Ship, and Galuf started to regain some memories. After a quick nap, the two geniuses went back to the Library. It was time to set sail. 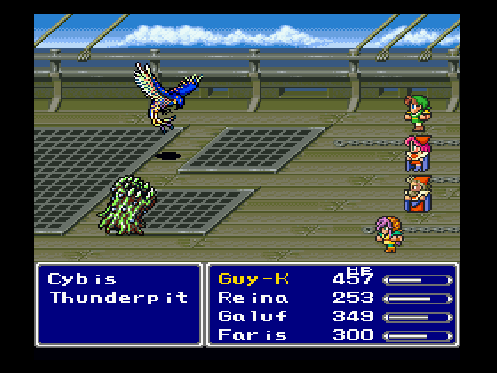 I encounter a variety of enemies that are annoying and potentially fatal. The Fins are the weakest and are the only ones weak to lightning that don't have absurd HP. The Thunderpits on the other hand eat lightning but are no big deal otherwise. Cybis is annoying because of its absurd evasion rate. Corbett is the worst of the four because of their high HP and brutal attacks that can damage the whole party. It's weak to lightning as well, but it's not worth the risk and definitely not something to break a rod or two over. Sure, I could use the money I could win to buy some more, but I'd rather not sail all the way back to Karnak. 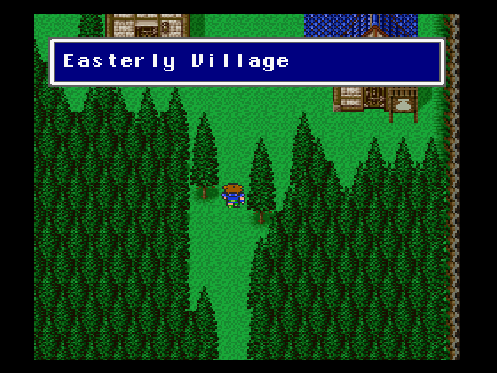 My first stop: Easterly Village. Unfortunately, this place is a waste of time. The rings are too expensive, I can't use the song, the Toad spell, or Ramuh, and I already bought all the Time magic earlier. 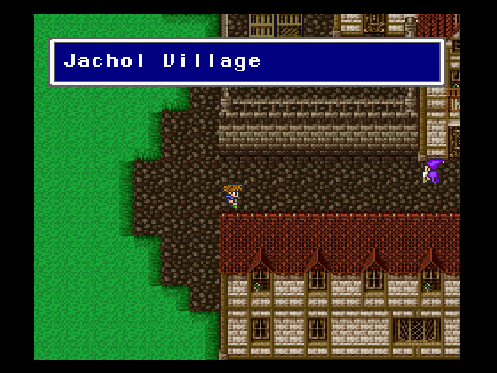 Jachol on the other hand had plenty of items. Too bad I couldn't afford anything other than a Silver Bow that I can't even use yet. I'm not even going to waste my time with the cave. The Skull Eaters will one-shot a character before I can do anything about it, and I can't use any of the treasures inside except for a Tent I can get anywhere. 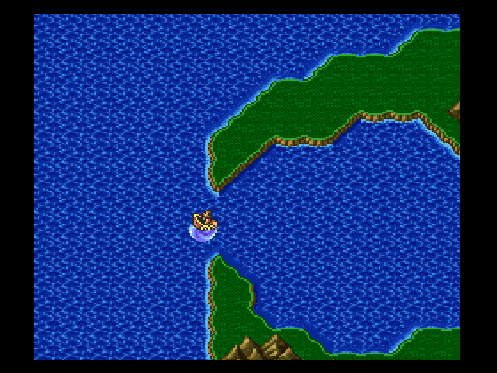 When I went to Crescent, an earthquake occured, followed by a whirlpool eating my ship. I couldn't afford any of the elemental bows yet, and the magic shop only sells black magic, so all I have left is the forest to the south. 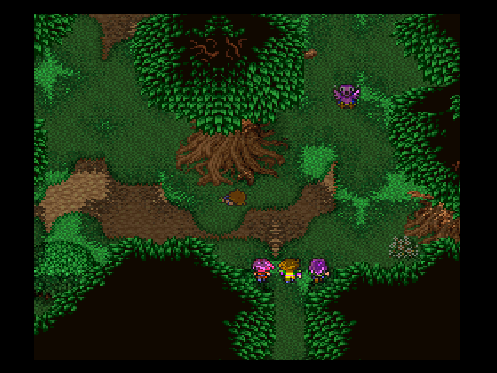 I found the Black Chocobo, which couldn't fly at first until Faris got them out of it (how they even got in the bird is anyone's guess). I also got the Ranger (called "Hunter" in this version) at last and now can have a full party in the back row. I went to Rikks to watch a few flashbacks. I went back to the Library to meet Cid and Mid, who told me that we need to go to the desert of the west. 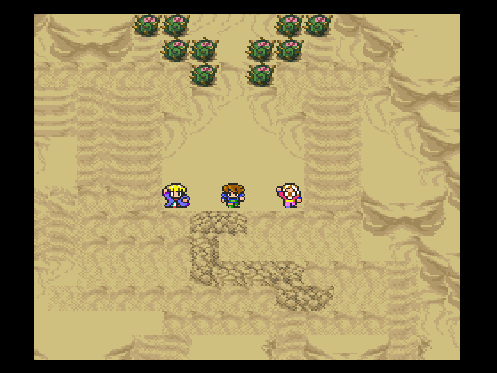 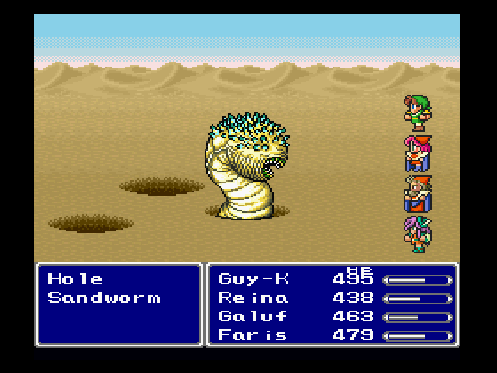 Upon entering the Desert of the Shifting Sands, Cid and Mid had the crazy idea to summon a sandworm to build a land bridge. They warned me not to use magic on the Sandworm, but I broke a couple of Ice Rods to speed up the fight a little anyway. The fight was more annoying than difficult, and I pulled through without a single casualty. The monsters are nothing special. I decided to steal a Javelin from the Sand Bear just in case I get a Dragoon for my Earth job. 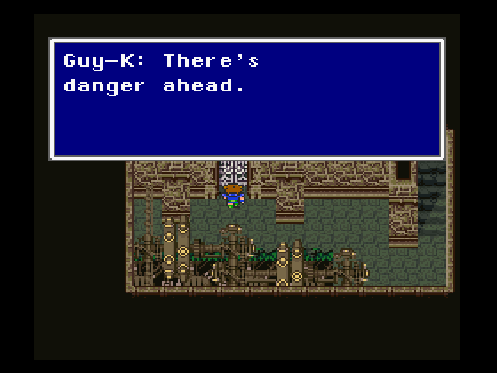 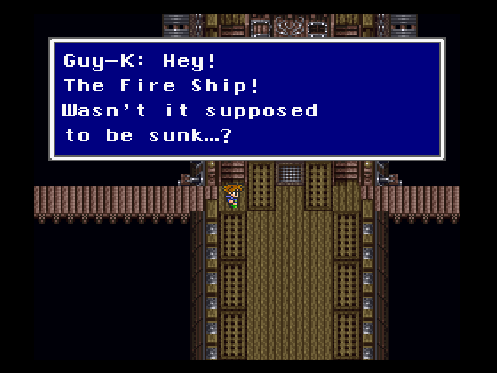 I made it to Gorn, which is just more plot advancement. After falling in a pit, I found myself in a weird place. After following the path, I found the Fire Ship, which I thought sunk. It was docked neatly right next to an airship. Cid and Mid drop in (literally) and tweak the Airship slightly so it can finally fly again. 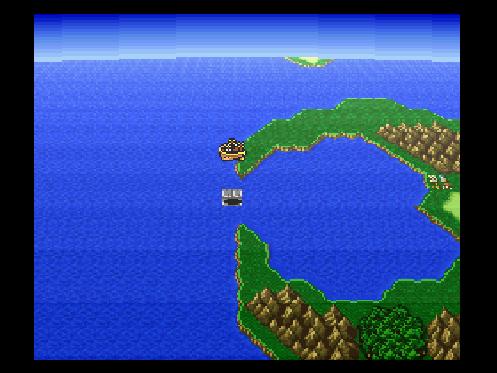 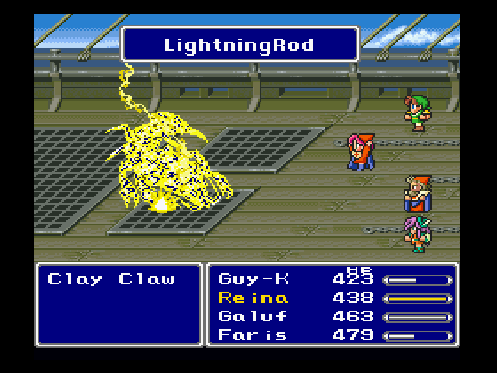 Just when I was ready to fly, Carl Boss' brother the Clay Claw assaults me. I started the fight by stealing its Coral Sword, then broke a Lightning Rod on it. This stowaway was a total joke. Claws and feet of clay indeed. 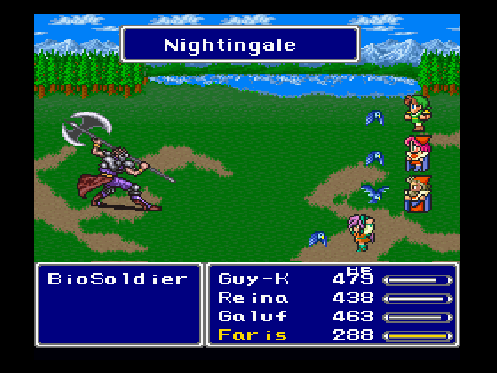 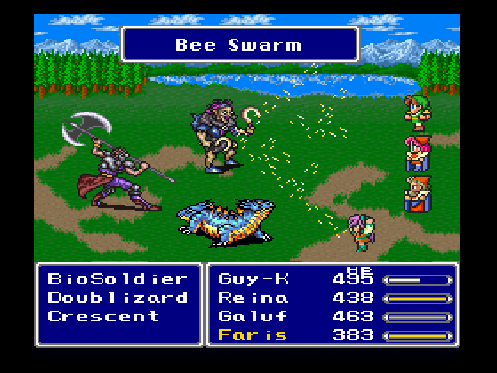 I also learned Critt(er), which can summon any wild animal to help me. Depending on my level, I can get anything from a worthless rabbit to a unicorn that fully heals my party. Since I'm currently Level 18, the Nightingale is the best I can summon at the moment, a mild but effective total party heal. The Bee Swarm also comes in handy and is one of my few options for attacking all enemies.