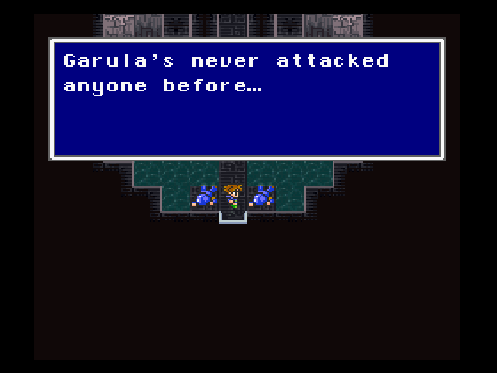 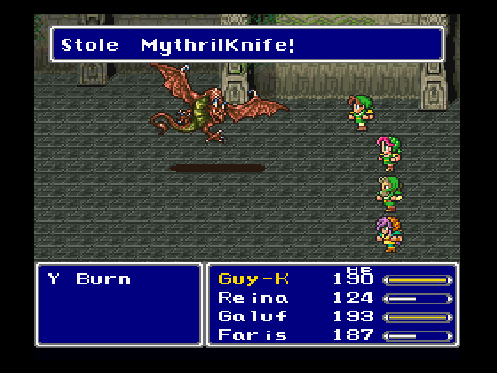 Upon entering the Walz Tower, I hear about a beast known as Garula rampaging his way upward. Something's not right. Garula's supposed to be docile. The enemies took much more effort to beat, especially the PaddleThru (really?), which took an entire party's worth of stabs to kill. One enemy of note is Y Burn (REALLY?!), which I can steal MythrilKnives from without having to buy them from Karnak. It didn't take me long to get the four I needed to increase my destrucity by 50%. The RNGods usually aren't this benevolent to me. 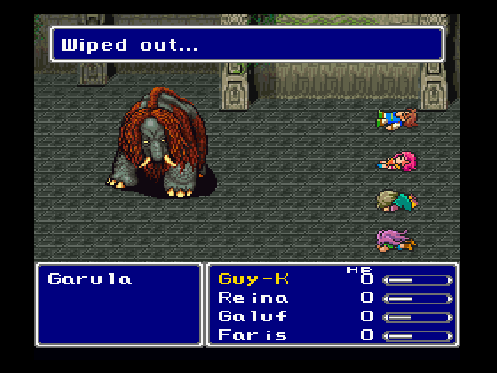 Garula was a tough boss. It hit hard and fast. It was the first boss to get me a Game Over. There was nothing I could do at Level 10, for I couldn't do enough damage to kill it, and I couldn't heal fast enough because it always outpaced my healing with its damage. Not even the Elf Cloak could save me. Level 11 wasn't enough either, nor was Level 12. Not even putting everyone in the back worked. The only solution is to level grind until I have enough HP to survive. While grinding, I stole some MythrilSwords (just in case I need them; I could just sell them too) and learned Steal, which is handy if I want to continue stealing items even with fewer thieves. Even when I got up to Level 13, I was still losing, but then I decided to rethink my strategy... 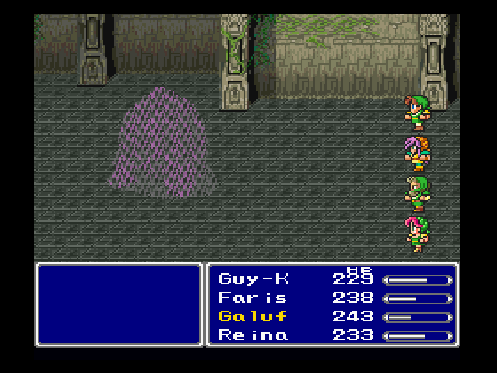 I put everyone in the back, except I decided to take it a little slower this time, and patience is indeed a virtue. I simply healed as often as possible and spaced out my attacks. This became a little more difficult when Garula grew more aggressive as it was closer to defeat. It was a long and drawn out battle that ate up much of my resources, but I pulled through in the end.


Time to see what the 4JF Gods want me to become... 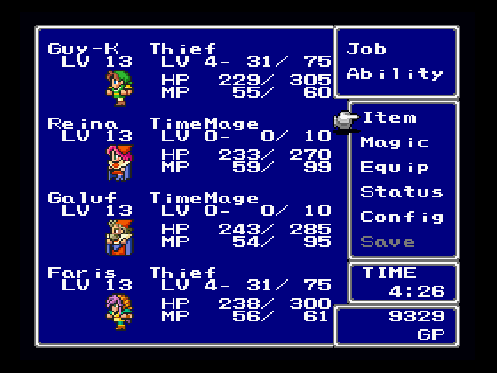 YES! The Time Mage has some useful spells like Haste and can break rods. With my current selection of rods, I can use some powerful elemental magic. That should make several bosses a breeze. 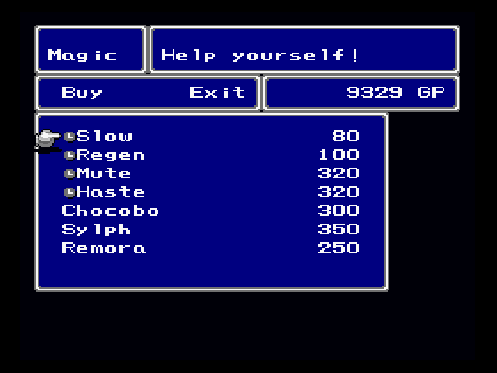 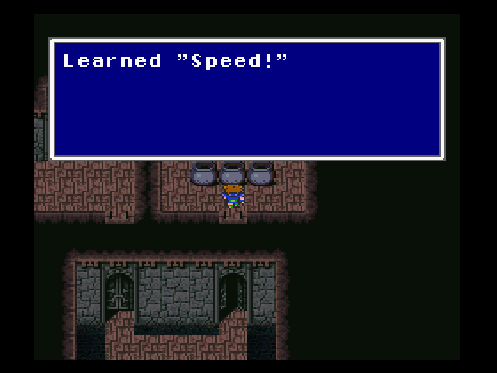 Since I got a Time Mage, I figured I should buy some Time Magic to make good use of them. I might as well go to the basement and get Speed from the pot while running from the Harpies. There's no point in getting Shiva, seeing how I don't have a Summoner. I briefly visited Tycoon Castle to visit and get several items (including a few I can't use), then headed back to the meteor where the tower sunk. 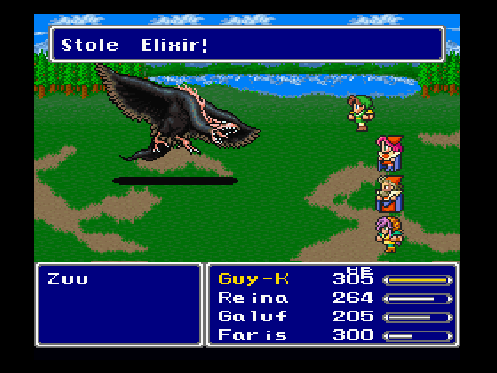 On the way to Karnak, I fought a variety of foes, such as some turtles that always drop shells (which may be useful if I get a Chemist) and Zuu (which carries Elixirs that I can steal). 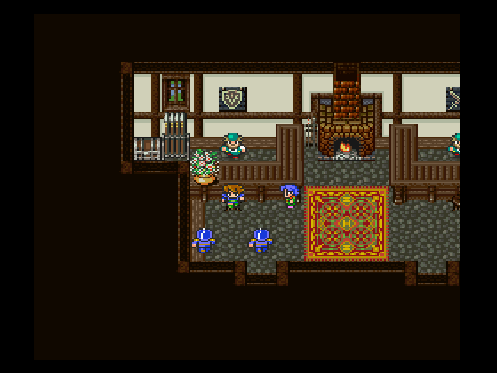 Just when I was ready to upgrade my equipment (at discount prices, even!), I get arrested because they think I'm some sort of monster. Looks like my quest prematurely came to an end. 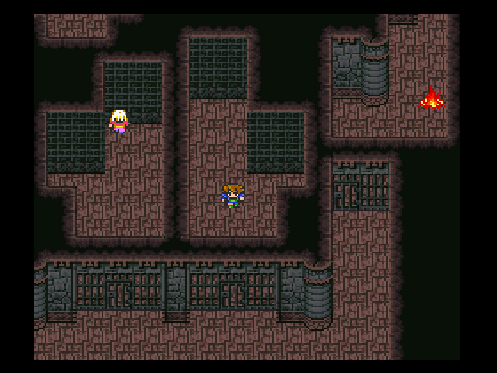 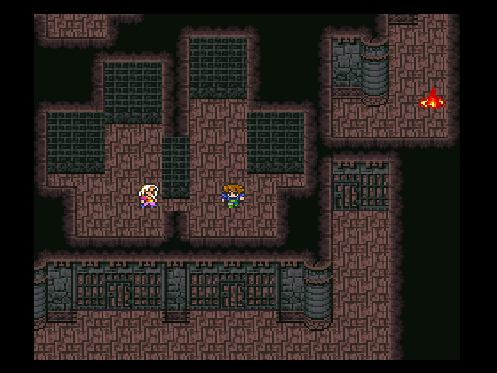 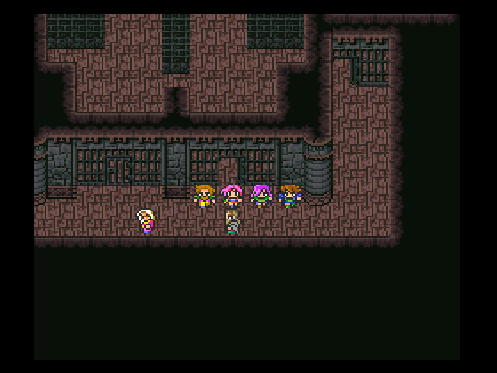 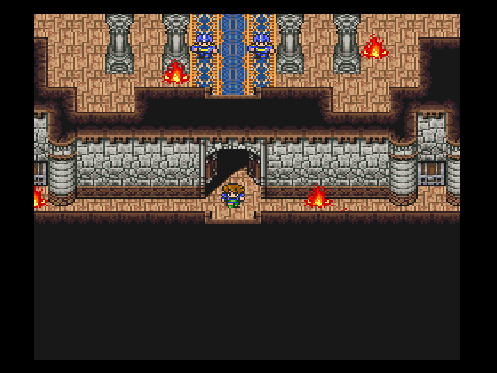 I want all those treasures, but there's fire everywhere. What kind of castle is this anyway? I went back to the town, but sadly the sale ended. I stocked up on as much new gear as possible. The Fire Ship and the Fire Crystal await. 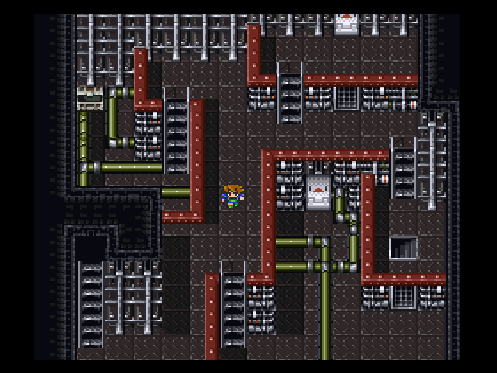 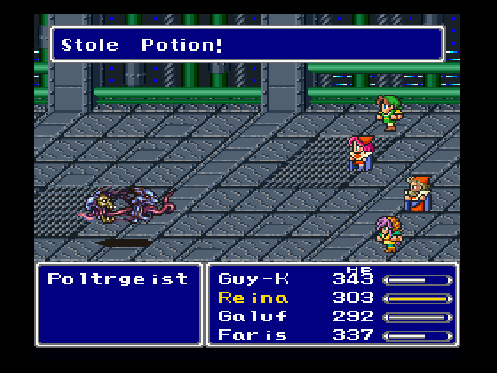 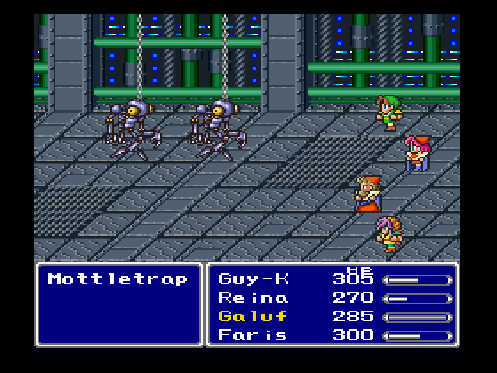 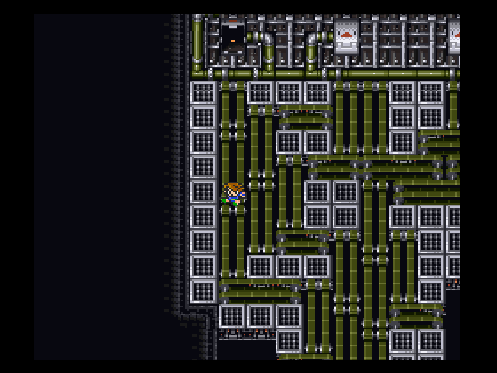 The ship is a huge labyrinth, featuring branching paths and monsters such as Mottletraps, robots that descend after I kill one wave of enemies and Poltrgeists, undead abominations I can steal Potions from; they're also pretty annoying because their tongues can confuse party members, and they can absorb Ice elemental attacks (at least I can still use Demi and half thier HP). Despite their names, Cool Dusts are weak to Ice and are an ideal target for my Ice Rod equipped Time Mages. Unfortunately, rod damage is inconsistent; it ranges from more than enough to kill the enemy to 0 even if the enemy is weak against that element. I came across a room with three doors and four vents. The most significant paths are the third vent from the left (leads to the Thief'sGlove, which doubles theft rate, a must for obvious reasons) and the second vent (the only path forward, which also leads to a handy Moonring that allows one of my thieves to attack from the back row and is stronger than any weapon I've got so far). 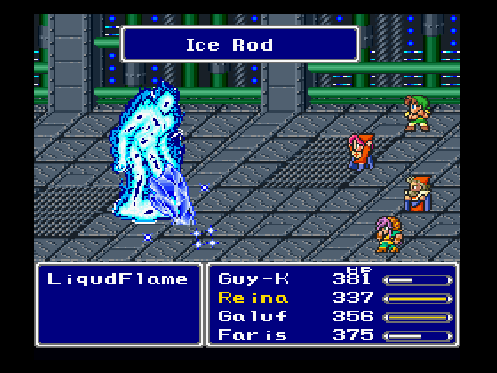 The LiquidFlame didn't take much effort to beat. Just a few attacks and an Ice Rod-breaking was all it took to down this creature. Insert obvious joke about removing the F from his name here. 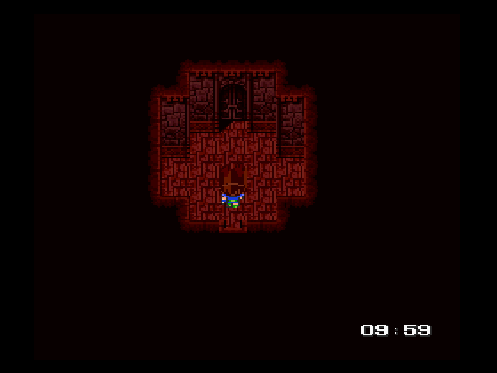 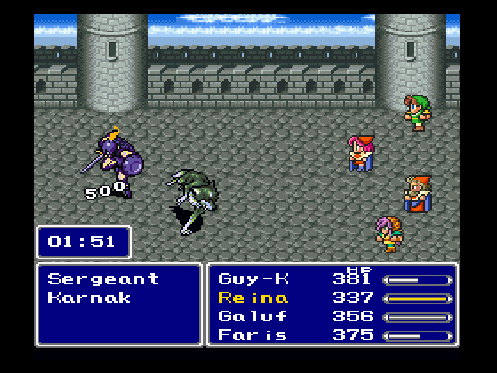 I had ten minutes to get out of Karnak Castle, but due to my low overall attack power, it wasn't enough time to get everything. I just grabbed what was in the prison, a HuntingKnife (slightly stronger than Moonring), a Ribbon (just in case) a Shuriken (which turned out to be a waste of an item, since I can't even use it for reasons established below), and another Elf Cloak. I even learned a skill that negates back attacks, but I felt too rushed to equip it; luckily, it wasn't even an issue anyway. Fearing I was going to run out of time, I just killed off the Sergeant before he could turn into the Iron Claw. I could've broken a rod, but I'd rather save it for later. After escaping, I was offered three jobs, so it was time for me to ask the Gods what I should pursue (note: a 40% chance of not getting any new classes until the time finally comes.)

Looks like I'll have to keep my two Thief and two Time Mage ensemble for a little while longer, but at least I didn't get a Beastmaster (useless against bosses), a Geomancer (can be useful, but pretty limited), or a Bard (where to even begin). I like the Ranger class due to its ability to fight in the back row without attack penalty and the ever so handy SShot (attacks four times at 50% damage, which means double damage if focused on one foe). After stocking up on Tonics, buying a bunch of elemental rods, and comforting Cid as he drowns his sorrows, I headed south.